I don’t know why I have the urge to update now that I’ve been hopped up on cold medicine and should be trying to sleep. My body is tired and the drugs are telling me to go to bed, but my mind is kind of moving, so yeah.

– So, I’ve become obsessed with American Girl dolls. It’s so weird because my mom and I agree that I definitely was not deprived of dolls when I was a little girl–I had plenty and I still have most of my Barbie dolls, actually–so what is it about THESE dolls that’s making me go crazy?

I suppose it’s because I’ve wanted one for years and now that I am in a position to get one (or more), I’m doing so. It helps that Adam is pretty supportive of me (although he did tell me I needed to slow down!), and he likes that I’m so happy with them. Sometimes, I just look at them and smile. And yes, I do play with them. Mostly I comb their hair and change their clothes. And photograph them. OH yes. I enjoy taking pictures of them. (I will take a better picture very soon; this one doesn’t do her justice)

I plan to get Rebecca, the new historical who is coming out on May 31st. THEN I should try to stop buying dolls (except the one I plan to get my mommy) because I want to enjoy the ones I have. Not that I don’t, because I do, but you know what I mean. I think. *shifty eyes*

– Aidan came up for Mother’s Day. I had a great time with him. He has lost his first tooth, and a second one is loose. But here is the kicker. There are already two permanent teeth growing in! There’s no room yet!

Friday, he arrived. I had to get up really early, so I was pretty dead at work that day. Saturday, it was raining and icky, so I declared it Pajama Day, and we stayed in our pajamas and watched DVDs, played games, and played with the dolls. We also took a nice nap together. It was a good day. Sunday, we went downtown. I love taking him to FAO Schwartz. And of course, we went to the American Girl store. I didn’t buy a doll, but Aidan and I had a great time looking at the displays and things. I love that he plays dolls with me. I know one day he probably won’t. He is truly amazing.

And such a good artist!!! Here is his drawing of all my dolls: 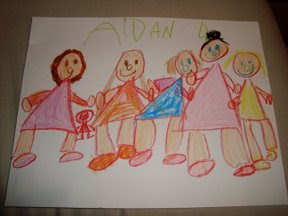 He is prolific, too. Adam took down the “Corner of Mystery” and changed it to “Aidan’s Art Museum.” We have tons of drawings by him up. He’s really good, and he’ll draw for hours. He’s always been pretty good. I’ll have to scan and post more pictures of his work.

The first time he left to get on the plane, there were tears from both of us and almost Adam, too. But this time, he was as cheerful as could be. When he doesn’t cry, I am less likely to cry. He’ll be back in 37 days, and this time it’ll be for the summer!

– Only 94 days until Disney World.

– I’m happy with the winner of America’s Next Top Model. I would have been happy with either of them this season, to be honest.

– I have discovered Feist. And she is good.

– Work is OK. Today I was on my own for most of the day and it was cool. I was pleasantly busy, which I like. Not overwhelmed, but not bored. Looks like I might be in this weekend. I escaped working last weekend which was great because I got to be with Aidan. But I may not be so lucky this weekend.

Which is kind of a bummer because I caught Aidan’s cold. So I’m feeling kind of under the weather, but at least it’s not terrible or anything. Nothing rest and fluids shouldn’t be able to take care of. This is the first time I’ve been sick in months.

This is how I knew I was under the weather. Usually at work, I am FREEZING. I wear layers and layers and I just shiver. Well, the past two days, I’ve been hot. I attributed that to the fact that I was wearing a sweater, but I’ve had on sweaters in the past and still froze my butt off. I was actually working in a tank top and bare feet at one point today I was so hot (after hours, of course). This is quite abnormal for me, and a clear indication that something is off. But again, everything’s fairly mild except for the mysterious being hot all of a sudden (which is a welcome change from being cold all the time, let me tell you), and my nose CONSTANTLY running!

Hmm, what else? See, I thought I had a lot to say and I really don’t. Oh, I rode to work in a school bus this morning. Really. This isn’t the cold medicine talking.

But I should go lie down anyway. I leave you with this picture of me waiting for the bus one Sunday morning before work. Comments Off on Hopped Up! (Pictures)