We started off that day with our bus luck back to not being so good. While waiting for the Hollywood Studios bus, approximately 42,000 Magic Kingdom buses came. And if I’m not mistaken, we had to take another trip through Port Orleans Riverside before finally heading toward the park. Fortunately, we weren’t trying to ride Toy Story Midway Mania, so it wasn’t that big of a deal not to get to the park right at opening.1

But anyway, we headed over to Rock ‘n’ Roller Coaster and Tower of Terror. Here is a somewhat embarrassing confession. Tower of Terror? It really does terrify me. I can only ride it every few years or so. The set up is so freaking scary. And the ride itself is different every time. So sometimes I get on and love it, other times I hate it like burning. Adam grabbed himself a Fast Pass for Tower of Terror, then we hit Rock ‘n’ Roller Coaster first thing. THAT’S how you start off a morning, let me tell you. The cast member there kept making the funniest quips and comments. And of course, the ride was awesome.

Adam and I spent a lot of time just walking around Hollywood Studios and looking at stuff. We did ride Star Tours, and it was completely different this time. We usually end up going through the Death Star, but not this time!2 We also did the Backlot Tour (but there were no actors for the beginning part so it wasn’t as fun–I don’t think they use actors in the winter, which is smart. I’ve gotten to “star” in that part twice).

I think my favorite part of the Backlot Tour is the big room with all the old props. It has a much cooler name but it’s eluding me now. It’s SO cool to see those things that have been in actual Disney movies. And I also love the museum at the end with more props: these are from the movie Titanic

We also rode the Great Movie Ride, which I love, in all its cheesy glory. We ate lunch at the ABC Commissary. THAT was a mess and a half. I usually like it there, but there were some *difficulties* and the shrimp was actually pretty gross. But this lemon meringue cupcake made things kinda worth it: 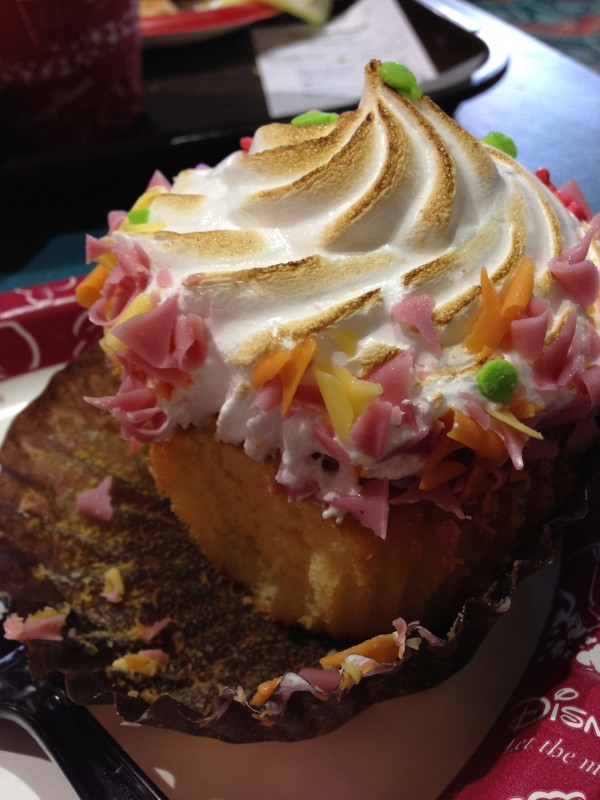 We made our way to the Magic of Disney Animation building a couple of times. I like it in there. It has character meetings, pretty art work, and exhibits and displays from their latest films and some classic films. There’s also a great art store. I have a zillion photos of that sign but I just adore it. It never gets old for me.

We ran into some adorable movie characters: Venellope liked my ponytail. I like my tee-shirt. This is the awesome one I got when I was at Epcot. It’s my favorite.

I like to do the Animation Academy if we get a chance, and we did this time. I got to draw Agent P from Phineas & Ferb: 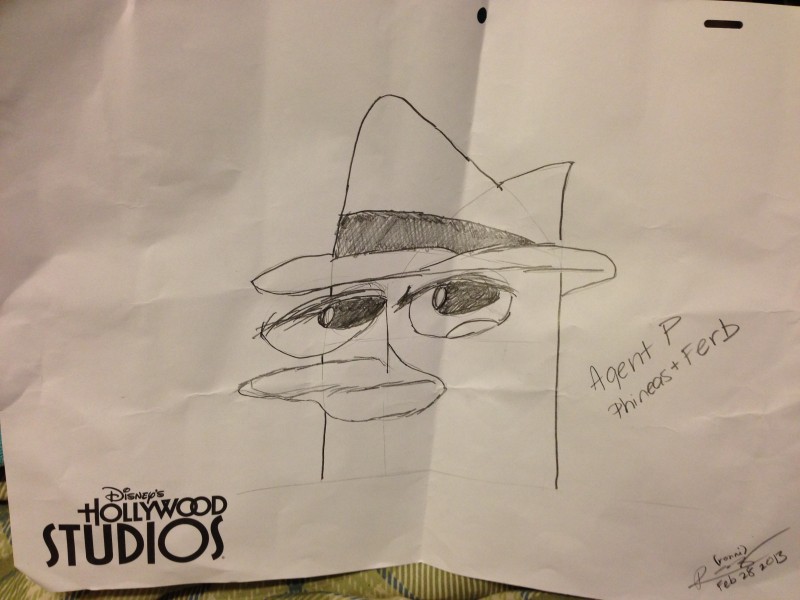 I don’t think I did too badly. What do you think? It really is cool how simple they make it. And you have to follow directions because the pencils don’t have erasers!

We FINALLY went through One Man’s Dream after walking past it for years and years, and it was really cool. It’s a museum full of really awesome Disneyana, and then we get to watch a movie about Walt Disney. { While we were in Hollywood Studios, Adam got a call from his agent to give him the good news that a YA novel he’d submitted was going to be acquired by Simon & Schuster. AWESOME right? Considering we’d had this tradition of him getting BAD book news at Disney World. What a way to break that curse, huh?

After Animation Academy, we were about ready to go. But then the Disney Channel Rocks show rolled right up and well, why not? I still think the High School Musical show was better, but that’s probably because I’m more familiar with that than a lot of the Disney Channel stuff they have now. Then they did the big mistake of asking people to join them. OF COURSE I DID. I was the only adult who went up there. Did I feel silly? Yes. Would I do it again?

All in all, we had a pretty low key day at Hollywood Studios. It’s not a park full of “must-dos” for us, so we just go with the flow. Good times. There’s only one day left of my trip report, and I’ll talk about our last day at Magic Kingdom, when we had some very special folks spend the day with us!