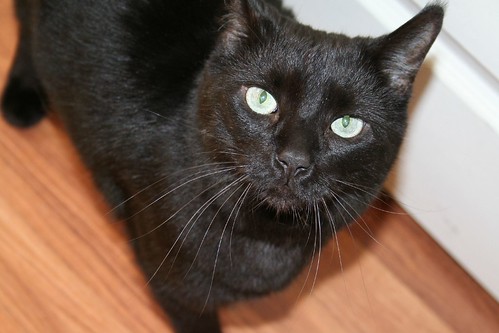 Fi was my first cat. I’d lived with others, but he was my very own. He was a Christmas gift from Chris in 1999. We had no business with a cat. We were drowning in debt, lived in a loud apartment on the Ohio State campus, and my job was stressful and paid just OK.

His name was Fiona because the person told us he was a girl. They also told us he was healthy. LIES, all of them. Fi turned out to be a boy, he had two types of worms, and was dehydrated. But he was my new baby, the all black kitty I’d always wanted for myself. Once treated, he was great. His sleek shiny fur, his bright green eyes. He was a sight to behold. He was also a bit of a diva. Would get so mad if I got on the computer. And if he was in a place and I came and sat by him, he’d get up and leave. Every time.

But he was so patient with Aidan. Baby Aidan loved to lay on Fi and Fi would just lay there and let him do it. 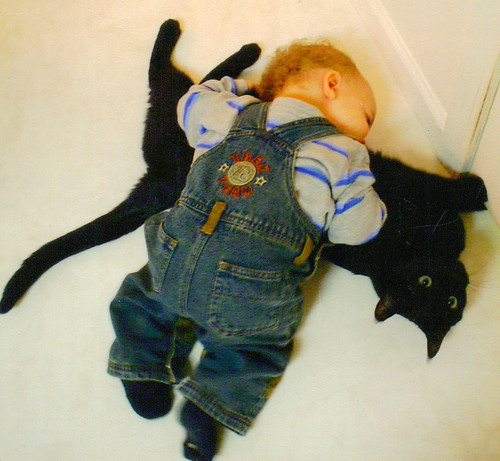 When Chris and I separated and I moved out, I left Fi with Aidan because he’d gotten quite attached. But Fi came to Chicago to live with me and Adam in 2010 or 2011, and he began purring as soon as he saw me. He remembered me! And he was here in his forever home. And one day, he asked to get on my lap. I lifted him up and told him it was OK. He had no issues asking for and/or taking cuddles ever since. 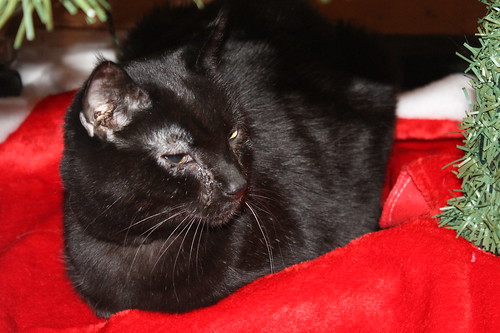 He used to be right by me while I worked. All day every day. Right by my side, or on my lap. Always purring. I miss those days.

Fi’s health started breaking down in 2015, when he stopped pooing in the litter box. And he was puking a lot. We tried everything. Medicine, diet. Nothing helped. After Helena’s sudden passing last year, I took Fi in, but again. Medicine. Diet. No luck. We spent years cleaning up poo. It was mostly Adam. To be honest, Adam did a LOT of the dirty work with Fi, all because he knew I wasn’t ready to let him go until Fi was ready to go.

We knew it was a matter of time. He’d stopped bathing himself, and suddenly he was having a hard time eating the dry cat food (canned food, treats, and people food turned him wild, though). He could barely walk. Adam thought it was time to take him to the vet for That Visit weeks ago, but my gut told me that was not the right thing to do.

(Plus, I’d taken a kitty to the vet only to unexpectedly walk out without her ten years ago, and I never wanted to make that choice again.) 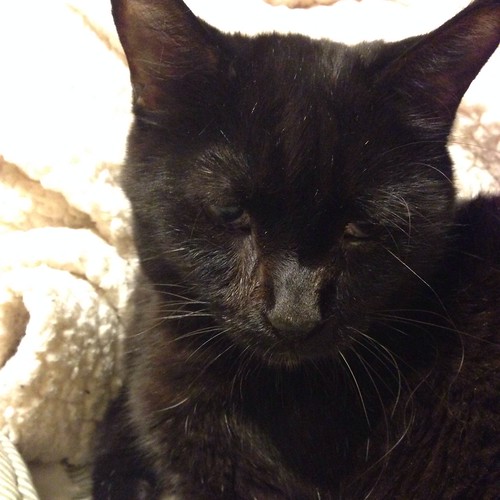 We knew it was coming, so we spent the past months spoiling Fi and making him as comfortable as possible. He got loads of treats. He got cuddles. We cleaned him best we could, but it was to the point where if we’d tried to wash him too thoroughly, he’d lose hair that wouldn’t grow back. He had a sore on his leg that wouldn’t heal, but we knew a trip to the vet would be too stressful for him. So we dressed it the best we could, which probably wasn’t enough.

I’d put him on my lap and rub lavender into his fur, to calm him so he’d sleep OK. And more treats before bedtime. When I was out from under my weight of work/illness/depression, I carried him around so he wouldn’t have to walk so much on his little leg.

He was stinky all over, but the top of his head was not. I kissed him there all the time. I’d just pick him up and carry him and kiss him until he was done.

Then, it was time. Saturday, Adam found him having collapsed. Fi was gasping. I picked him up and held him as he took his last breaths. I kissed the top of his head. I told him it was OK for him to go, and that I loved him so much. My sweet old man passed in my arms.

I was prepared. He was 18 1/2 years old. He’d been sick for a long time. It still hurts though. I miss him and his cuddles and his little meows. I miss him.

Goodnight, sweet Fi. You had a long life. It wasn’t always easy. But you were so, so, so loved. I hope you’re resting now. 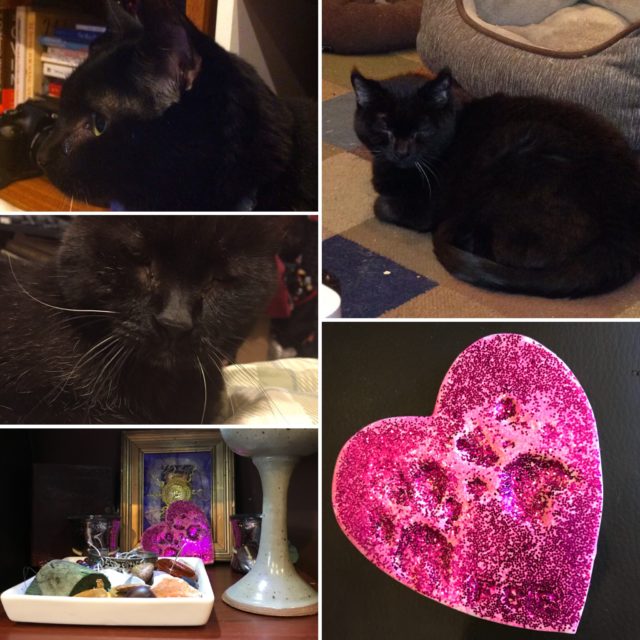