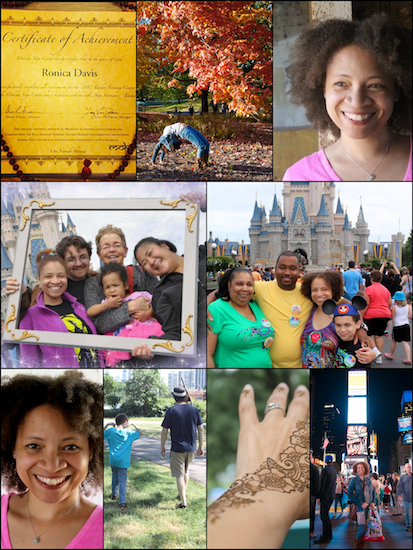 Was 2013 a good year for you?
For the most part, yes! Especially the first nine months. I was busy, productive, learning, making friends and being with friends, doing new things. The last three months, I dropped the ball, though. I started hiding, and breaking down. Still trying to climb back up from that….

What did you do in 2013 that you’d never done before?
– was a movie extra in a feature film
– camped out in a tent
– became a certified yoga teacher (CYT-200)
– got sick from a fair ride
– rang in Christmas with friends and chosen family at a pancake party
– visited the Bahai Temple
– many sites in NYC: Columbus Circle, certain parts of Central Park, Grand Central Station, and more
– went to Six Flags
– rode X-Flight and Superman while at Six Flags
– rode rides at Disney World that I’d never ridden before (Dinosaur, Primeval Whirl, Voyage of The Little Mermaid)
– ALA conference
– beat LEGO Harry Potter Years 1-4 and 5-7 multiple times. I cheated but still.

Did anyone close to you die?
Adam’s friend from middle school passed away. It was an eye opener because she was younger than me. She was a peer. I’m at the age where my peers are dying and it’s not necessarily because of a disease or an accident. It’s scary and sad.

What countries did you visit?
None. Dammit. I have GOT to fix this.

What date(s) from 2013 will remain etched upon your memory, and why?
I don’t have particular dates in my head. Just lots of general memories.

What was your biggest achievement of the year?
– I got my certification to teach yoga. I am a certified yoga teacher.
– I survived two long days on the set of Divergent, in uncomfortable conditions, and still decided I wanted to do more of that.
– I had a goal to read 75 new books. I read 96 new books.

What was your biggest failure?
– I still don’t know what I want to be when I grow up.

Did you suffer illness or injury?
Yes. I had some colds and a pretty icky virus during the summer. Also had a trip to the ER in late July. Eventually I will need surgery. I’m trying to put that off as long as I can.

Where did most of your money go?
Disney trips, clothes, books, and gifts.

What do you wish you’d done less of?
– being afraid
– hiding
– wasting time on social media (tumblr and facebook especially)
– messing around on the computer/ipad/iphone

What was your greatest musical discovery?
This kind of music that’s sometimes called “chill step.” It’s dub step, but not as intense or fast. I love it. Blackmill is a great example of really good chill step. I also fell in love with Charli XCX, Haim, Lorde, and more. I really like female vocalists, and if they’re a little different? Even better.

What did you want and get?
– macarons from Laduree
– a trip to New York City
– to take my mom to Disney World
– to be an extra in Divergent
– to meet Gaston at Disney World
– new jewelry from Tiffany

What did you want and not get?
– MORE AIDAN TIME (there is never enough)
– a flat stomach
– a trip out of the country
– to meet Theo James
– to see the Statue of Liberty, the Cloisters, and the High Line in NYC

What did you do on your birthday, and how old were you?
I turned 39. (Seriously, how am I 39?) I hung out with Aidan. I got really cool gifts, and ate Harold’s chicken for dinner. It was a pretty good day.

What political issue stirred you the most?
The Affordable Care Act

Tell us a valuable life lesson you learned in 2013:
– a feeling of terrified excitement in relation to a new experience usually means that whatever’s coming is going to be amazing and epic
– depression has a much stronger and scarier hold on me than I realized
– taking a job below my skill set and pay grade when I don’t have to will make me resentful and sad
– giving generously is very liberating
– having too much stuff is making me feel claustrophobic and weighed down. it’s time to seriously declutter.

What one thing would have made your year immeasurably more satisfying?
Being able to spend more time on the Divergent set. Being able to do more acting in general.