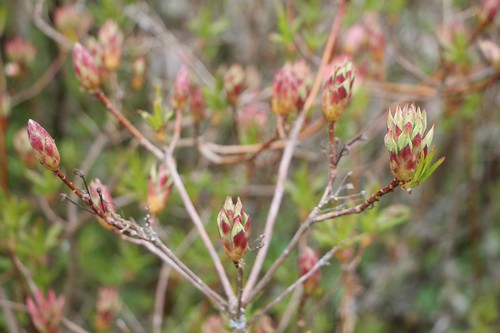 Dealing with a lot right now. Not only physically, although that’s quite enough. With my incision burning, my finicky appetite, random nausea, and general fatigue. At my post op appointment, my doctor told me all the stuff that went down. There was the endometriosis. But also endometrioma, which are ovarian cysts filled with blood from endometrial tissue. One of the ovaries was pretty much taken over by it. In addition, the endo had started burrowing into the muscle in my uterine wall. It was everywhere.

By the end of the year, I was exhausted and in pain almost all the time. But it felt manageable (with lots of ibuprofen) until moon time, when it got unbearable. I’m glad all that’s behind me. Even with feeling icky with recovery stuff, I am better than I was then.

Right now I feel run down and sore. I think I overdid it Friday; I sat up a long time playing video games. I spent all day Saturday in bed but I don’t know if that was enough. I’m still not feeling great. But that’s OK and expected. One step forward two steps back they say. It’s the mental and emotional stuff that’s really messing me up. This was something I’d read about happening, but I didn’t think it would affect me for the following reasons:

1. I’d been done having kids for a long time, so I’m not mourning the fact that I can no longer have children.
2. I was more than ready for the surgery. Years of painful, heavy periods and migraines made sure of that.

What I didn’t anticipate was the following:
1. Getting thrown off my antidepressant schedule because of my erratic sleeping. (I’m working on fixing that now.)
2. Feeling randomly emotional anyway. Constantly on the brink of tears the past few days.
3. The publishing journey hitting a lot harder than it should be, making me—once again—question if I have the strength to endure all the stuff that comes with it. And wondering if all the waiting and torment and self-doubt and work, work, work will ever be worth it.
3a. Here’s the thing about writing. I can’t just turn it off. It’s a part of me and I have to do it. I have to create. But the thought of teen girls like me never getting to see themselves represented because I worry I will never be good enough to get published for them? It hurts. Maybe it’s arrogant of me to think this way, but it’s there. And it leads to #4:
4. Feeling an overwhelming sense of failure. Feeling like I’m letting people down with my shitty writing. Feeling like I’ve wasted more than a year doing a bunch of work for nothing. If I keep going but it ends up being proven that I suck, then that’s a failure of my storytelling and skills. but if I quit, then an even bigger failure, right?
5. And switching gears: mourning the loss of some of the organs that were taken out during surgery, even though they caused me torment and pain for the last several years.

I don’t know which of these things are real or not. Which are legit emotions and concerns, or which are because of the flux in my hormones, my body doing its thing to repair and recover, all the drugs, my appetite being all weird, the state of the country and the world. I feel overwhelmed and I want to escape but I can’t exactly escape myself and my own brain right?

I’m trying not to think too much, trying to focus on recovery, but to be honest, I have a lot of downtime, which means my brain has a lot of time to turn against me. So that’s what it’s doing.

So yeah. That’s me right now. Just keeping it real, I guess.