This week’s blog challenge topic is “your celebrity crush.” 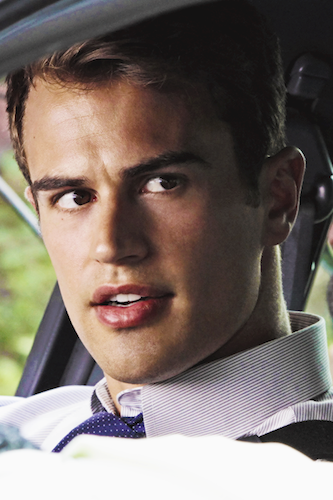 You’re not convinced? How about this:

This is Theo James. I first spotted Theo James while I was watching Downton Abbey with my friend Jen. This fool came riding up on a HORSE and I almost fell off the couch.

His character was a rotten bastard on that episode, but I was intrigued by the actor. I remember googling to get more information on him. There wasn’t much. Theo wasn’t well known yet, he was British, and wasn’t getting a lot of exposure over here in the States. I don’t even know if he was getting a lot of exposure in England. He was on a few TV shows and had been in a few movies, but as of a few months ago, he could walk down the street and take the tube in relative anonymity (as long as you don’t count the two fangirls who recognized him and kind of stalked him onto the train which is how I know this).

But then CBS cast him as one of the leads in the show Golden Boy. I was thrilled, glued to the TV every Tuesday night. You know I don’t watch a lot of TV, so I don’t have a lot of characters that I get vested in. I ended up falling in love with everyone on the show, and I was really disappointed it when CBS cancelled it in May.

So, that happened. But it was probably for the best. Golden Boy was a good show, but now things are going great for Theo. More people are learning about him because he’s Four in the Divergent movie. Which was FILMED IN CHICAGO. I was even an extra for Divergent but he may as well been back in England for all the good it did me those two days on set. Not that I went there trying to meet him or anything… I mean, HELLO, I was going to be on set for a major motion picture. That kind of eclipsed anything else. (I wrote all about that experience here.) Meeting him would have been a nice bonus though.

Then… as TV star crushes go, you put them in the back of your mind. They’re fun, but they’re not real life. I’m married, and I’m–along with anyone else who pays the least bit of attention–pretty well convinced he’s in love with his Divergent co-star, Shailene Woodley. They are insufferably cute together.

– He’s silly. He has no filter. Just watch interviews with him. Expect anything and everything to come out of his mouth. It’s great. I imagine that his friends spend a great deal of time alternating between choking, screaming laughter and face palming when Theo really gets going.

– He seems modest. He knows he’s good looking, but he seems matter-of-fact, if not downright annoyed, about it. He does get irritated when he goes on interviews to talk about his work, and people only want to talk about how good looking he is. I hope this makes him sympathetic to his female co-stars, who have to deal with that shit nonstop.

– He is really an amazing actor. Seriously, he is one of the best I’ve seen in the entertainment industry. He’s got a great face, but he knows how to use his face, something I’ve noticed that British actors generally seem better at than American actors. He works hard but he makes it look effortless. He can play a hot headed detective, an angsty psychic, an insufferable douchebag, or a snobby, passion-filled welp, and he’ll OWN EVERY ONE of those roles. I love watching him act because he is sooo good at it. There are only a few others I can say I feel that way about (Angelina Jolie, Jennifer Lawrence, Johnny Depp….). His work is inspiring to me. It is also intimidating.

I think he’s got a really bright future ahead. On the one hand, I miss the days when no one really knew who he was, but on the other hand I want him to be successful and happy, and I know that means he’s going to get really famous and become that much more inaccessible. All I can do is keep hoping (please please please!) that I’ll get to meet him one day and tell him in person how much I admire and genuinely enjoy seeing him work. And also give him a bag of Cheetos.

Today also happens to be his birthday, so I hope he’s having a good one, wherever he is.

* some gifs from Theo James Gifs, Jen7Waters, and Theojamies, and my personal collection which probably came from those sites. This week’s blog challenge topic is “things you love”.

All right then. This will be a fun one because it will encourage me to think positively, something I have a hard time with when it gets colder out.

I also love getting comments, so please comment and tell me what you love!

Comments Off on 30 week blog challenge-week 14: things you love

This week’s blog challenge topic is “something you want to buy.”

Funny how that coincides with the holiday shopping season! Because frankly, I want to buy fun gifts for my family that they will love.

My goal is to be done Christmas shopping by December 10, because I want to send the stuff I need to mail off by December 15. I’m about 90% done. I just need to pick up a few more things, and then anything else will be fun, bonus stuff.

So, that’s this week’s answer. Short and sweet.

Comments Off on 30 week blog challenge-week 13: something you want to buy Hi! I missed a week of the 30 week blog challenge, and I nearly missed another. I figure I’ll do these two weeks and get back on track next week!

Week 11: Nicknames You Have and Why

My main nickname is Ronni. That’s how I introduce myself to people, that’s the name I go by on almost all of my social networking profiles, and that’s how I identify myself. My parents gave me that nickname when I was little, only it was spelled Ronnie back then. I am not sure when I dropped the e, but it probably happened while I was in high school. It’s just a lot easier to be “Ronni” than to try to explain why I’m named “Ronica” instead of “Veronica”.

Week 12: Something You Bought Recently

Hmm. Well, last week, I bought the Catching Fire score. I have a thing for movie scores, and I had to have that one because I loved the movie so much. I also bought some things for Thanksgiving, some cat food, a toothbrush, and other assorted boring things. Catching Fire was definitely the most exciting of the purchases!

Comments Off on 30 week blog challenge-weeks 11 & 12: nicknames and purchases

This week’s challenge is to post a photo of me taken over ten years ago.

How about this one? I was about seven months pregnant with Aidan here: I made it a third of the way through the challenge! Only 20 more weeks to go.

Comments Off on 30 week blog challenge – week 10: a photo of you taken over ten years ago