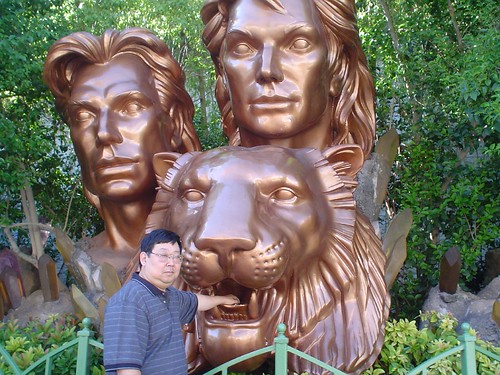 I still haven’t fully processed it, because I can’t believe it’s real.

And sometimes I do remember it’s real, and it’s like a punch in the gut. And yet, I smile because I don’t want to make anyone else cry, even though I’m crying inside.

My mom and Greg started dating in 1995. He’d actually written her a note asking her out, so I tease her about it all the time saying he gave her a note that said “Do you like me? Check yes or no.”

Apparently, it worked. They got married in June of 2000. They eloped to Vegas, which was not even surprising, knowing them. I was so happy for them.

From the beginning, he treated me like his own. He knew the perfect gifts to give me for holidays. He and my mom flew me out to Las Vegas for my 30th birthday and paid for everything. It was crazy. He’d give me a $10 bill and tell me to get him a pop and keep the change. It was years later that I realized that was his way of giving me spending money, because while you’re gambling, beverages are free! And he was always gambling! He gave me money for the slot machines. I am not a risk-taker, so I’d win $2-3 and then quit. I was richer when I came back than I was when I landed.

I remember one Christmas, he woke my mom and me up at 3am because he was SO EXCITED for Christmas to start. And then the power went out. We opened gifts at 3am by candlelight and I was so scared the wrapping paper would catch a flame and we’d burn down the whole building.

He walked me down the aisle when I married Chris. I remember being a bit nervous to ask him. My mom said he got choked up. Then he said he’d be “honored” to do it.

He said “oinky the badoinky” instead of “poop.” He always made a sad crying noise when I had to leave Ohio and go back to Chicago or wherever.

He fed the animals that come up on their balcony. He bought entire loaves of bread for the squirrels and birds, and now they come to the door and look in, waiting. The past few days, it’s been Aidan and me feeding them. My mom will take over when we head back.

He spoiled my mom rotten. Whatever she wanted and he could get for her, he did. I could have loved him for that alone.

I never realized it, but now I know that he would have done anything for me, had I only asked. I just never had to ask.

But I guess I can’t ask him to come back.

RIP Greg. I know you’re playing the most awesome poker game and winning ALL the money! Thank you for being a dad to me and thank you for taking such good care of my mommy.